Let's see how Paul says that those who tasted the heavenly gift and were partakers of the Holy Spirit, later went astray

This passage below (Heb 6:4-6) is a clear declaration of the possibility of losing salvation on the part of the believers. Let us analyze it.

Paul is unquestionably talking about those who "were once enlightened; tasted the heavenly gift, and were partakers of the Holy Spirit". We don't need to give it much thought to realize that the person that satisfies those requirements is nothing less but a saved person, a born-again person, a Christian. I don't see a way of twisting things to make it seem that a person who has been enlightened, who has tasted the heavenly gift, who has been a partaker of the Holy Spirit, who has tasted the good word of God and the virtues of the coming age, is not yet a Christian, has not yet been born again.

Furthermore, by saying that they "fell again" we can clearly see that they had gone away from sin, by the grace of God, and they fell into it again. Well, according to Paul, some of them went astray. In other words, they were once saved, and now they are not. It is to say that they had to be renewed again, therefore they had been renewed before. Let's see.

"4 For it is impossible for those who were once enlightened, and have tasted of the heavenly gift, and were made partakers of the Holy Ghost, 5 and have tasted the good word of God, and the powers of the world to come, 6 if they shall fall away, to renew them again unto repentance; seeing they crucify to themselves the Son of God afresh, and put him to an open shame." (Heb 6:4-6)

Well, these whole Christians fell away, as indicated in verse 6; and they shall not receive another opportunity, for in order to do that, Jesus would have to be crucified once more, and that is inadmissible.

And, I dare add, I am sure that he who was saved on the first crucifixion, and fell again, once saved again through a second crucifixion of Jesus, he would fall once more; for if he didn't think much of the first crucifixion, which he believed to be the only one, much less would he consider the second one, being sure there would be a third, and even a fourth. Therefore, taking into account human behavior, it is nothing but logical not to repeat the Lord's crucifixion, and he who falls away from the faith must pay the consequences.

Some believers of this heresy, "once saved always saved", in order to get out of the bind that this passage puts them in, claim that here Paul doesn't say that the Christian can fall, but it is rather a rhetorical question, in which he says that, "even if someone were to fall from grace, Christ would not be crucified again".

Well, first, Paul is not asking a question, but making a statement. Neither did the Holy Spirit ask a rhetorical question, but a categorical declaration. Second, if a Christian cannot fall, under any circumstances, if that were absolute and totally impossible, it would be illogical for Paul to talk about it. It would be useless to warn that there would not be a second crucifixion, because it would not be needed, no one would ever fall.  It would be like warning a pedestrian on the paved streets of his city, to be careful not to be bitten by a shark that is wandering the streets. It is illogical to attribute such senseless words to an inspired man, like Paul, warning of a danger that he very well knew, did not exist.

Who falls back? The Lord God knows that the human being is weak, and thus He has provided the opportunity to repent. No, repentance is not lip service, it is heartfelt. When a Christian sins out of weakness, or a very strong temptation, or trying to be holy without God's help, or out of ignorance, or trying to face temptation without divine help, etc., and falls, but is sorry that he did, and repents truly, such Christian has not to fear of losing his salvation. That is precisely why Jesus died. This is proven by Peter's sin. But note his repentance: he wept bitterly.

Such is not the case of him who sins and does not weep bitterly, because he does not love the Lord and therefore is not sorry for the betrayal, he is just using Jesus to be saved. This type of religious individual believed that Christ was his savior and his past sins had been forgiven; but he does not hate sin, on the contrary, he loves sin more than he loves Christ; that is why his sin draws him away from God, because he loves his sin more than he loves the Lord.

Those who sin and are not sorry of having sinned, those who sin and think they have to be forgiven, because we are under grace, are the same that little by little harden themselves. Their love for sin is such that they feel no guilt. They walk all over Jesus, they hold in contempt the blood of the covenant, by which he has been made whole, and despise the Spirit of grace. It is those of whom Paul talks about as having but a horrible hope or judgment and fire. Make no mistake, brethren, the sacrifice of Jesus Christ is holy and we cannot play with it the game of "sin-and-go-repent, but I sin again because I love it", and you have to forgive me, because I believe with all my faith, that once saved always saved".

Now, no Christian should think that falling back is about just any sin. In I John 5:16 we see the apostle John mention prayers in favor of a brother that has committed a "sin not of death". Any sin that, after it is committed, causes a deep pain in the soul of a believer, is a forgivable sin.

The Lord, conscious of the moral and spiritual filth of the human soul, has provided a shock absorber between our actual salvation and the abyss of eternal damnation. Not because we just cross the limits of holiness we are immediately going to fall into the abyss. However, if we fall too far away from the limit, and we get ourselves more and more into the dark muffling zone, we may very well run into the abyss, before we can see it and turn back, because our eyes are callused by the sin and we can't see the abyss.

It is as if the path of holiness in our lives were lined by a muffling zone on each side; and just ahead of that muffling zone, on each side, is the sinuous lining of the horrendous and treacherous abyss. If we go down the right path that the Lord has set for us humans, we have no risk. However, if every now and then we go astray from the path, only to return immediately, we have little risk. But if we make it a habit to walk down the muffling zone, without never really going down the right path, we are almost certain we will fall into the abyss of eternal damnation.

If I were to show what I'm saying graphically, I would draw the figure that follows as a straight path, a muffling zone on both sides and an abyss of eternal damnation a little further, all seen from above: 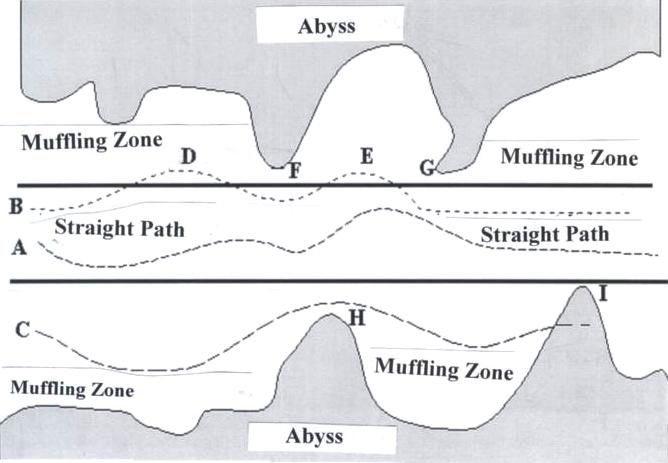 Anyone who, like person "A", goes on the God instructed way, without wavering, is never in danger. Others like person "B" who sometimes wavers, but repents and turns back, is not at a lot of risk; only if the segments "D" or "E" along the way meet up with points "F" or "G" on the spiritual sphere, can he be lost forever. However, person "C", who has gotten used to walking on the cushion zone, sooner or later will fall into the ravine: if he avoids it in "H" he will fall in "I".